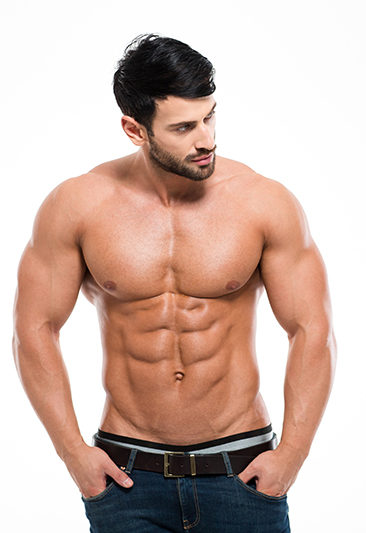 At the end of the study, resistance training had no significant effect on body weight and body mass index, whereas it decreased body fat percent.
The decrease in body fat was also associated with an increase in serum adiponectin (i..e increased insulin sensitivity), and testosterone concentrations were increased after resistance training while there were no significant changes in serum levels of these hormones in the control group. According to the findings of the present study, increased levels of adiponectin and testosterone after resistance training in obese young men, is associated with lower body fat and fasting insulin. The takeaway findings of the study is that if you are looking to increase testosterone from resistance exercise, it good to lose excess bodyfat. Even though the subject’s weight did not change in the twelve-week study, they lost bodyfat which was associated with an increase in testosterone and insulin sensitivity.

It’s no surprise that more and more American men are becoming obese. One of the more shocking findings that researchers have found is that not only does obesity increase the risk of heart disease and diabetes and hypertension, it also reduces a male’s testosterone levels. One study found that reported that approximately 52.4% of all obese men had low testosterone levels below 300 ng/dl (10.4 nmol/l). The standard range of testosterone levels in healthy adult males is between 280 to 1,100 nanograms per deciliter (ng/dL).

On April 2, at ENDO 2016, the annual meeting of the Endocrine Society, in Boston, researchers presented some new research on how testosterone not only helps preserve muscle mass on a diet, but it also promotes loss of body fat. Overall, 40 percent of obese men have low testosterone. The decrease in testosterone may be related to the excess estrogen levels being secreted from adipose tissue or insulin resistance.  Weight loss due to calorie restriction is associated with increased circulating testosterone, and testosterone treatment reduces fat. However, researchers don’t know whether adding testosterone treatment to calorie restriction reduces fat mass more than calorie restriction alone. Dr. Grossman and colleagues conducted a clinical trial of 100 reasonably healthy obese men from the local community between 20 and 70 years of age who had low testosterone levels.
Overall, 20 percent of them had diabetes and 10 percent had heart disease. For the first ten weeks, all participants were placed on a strict 600 kcal per day very-low-calorie diet. They were also encouraged to abstain from alcohol and perform at least 30 minutes a day of moderate exercise. Every ten weeks over the 56-week-long study, 49 men also received injections of 1,000mg of intramuscular testosterone undecanoate, and 51 took a placebo. At the end of 56 weeks, both groups lost roughly 11 kg (24.2 lb). But those in the testosterone group lost almost exclusively fat while those on placebo lost both lean and fat. The men taking testosterone lost 3 kg (6.6 lb) more body fat than those on placebo and maintained their muscle mass while those on placebo lost 3.5 kg (7.7 lb) of muscle mass.