In the world of weightlifting, many countries have produced champions over the past half century. In recent years China, Kazakhstan, Iran, and North Korea have been fielding strong teams and mining plenty of gold internationally. One country that has always been powerful, however, is Russia. Vlasov, Alexeev, Rigert, Vardanyan, Kurlovich – these are names that have become legend.

In 2015 the World Weightlifting Championships were held in the United States, for the first time in 40 years, and the Russian champions did not disappoint. The Russian men’s team captured the team title, their women earned the silver, and the star of the show was Aleksei Lovchev. The powerful super heavyweight shocked the world when he broke the absolute world record in the clean and jerk with 582 pounds.

After witnessing the Russians’ perennial show of strength, we have to ask: “How did they do it?” “How have their training methods evolved over the past century?” And, more specifically, “What can they teach us?” One person who can provide some answers is Sergey Bondarenko.

Bondarenko was a member of the Russian National Weightlifting Team and won the Championships of Moscow 11 times. He would often compete against Lovchev and share the same training facilities in the final days before international competitions. Bondarenko started training consistently at age 11. Because his father and grandfather were weightlifters, Bondarenko says “there was no question which sport I would choose.”

Bondarenko had several coaches in his athletic career but achieved his best results in his peak years when he designed his own programs. His best official lifts are a 434-pound snatch and a 507 clean and jerk. In training he has hit 440 and 518, respectively, at a bodyweight of 286, a relatively light bodyweight for a super heavyweight. As for absolute leg power, Bondarenko’s best results include 551 x 3 in the front squat and 661 x 5 in the back squat. Bondarenko is still training hard but has expanded his involvement in the sport with part-time coaching and offering online coaching services [contact info: s.bondarenko1989@gmail.com].

Although Russia is currently back on top in weightlifting, China has been dominating the sport for the past two Olympic cycles. Bondarenko attributes China’s success to sound training methodology, which has its roots in Russian sports science, but even more so to the fact that the Chinese government “invests in results.” More specifically, the Chinese have an abundance of weightlifting gyms, use proven recovery methods, have access to modern Western sports medicine equipment, and use a motivational system that includes financial rewards. This provides their coaches with a large pool of genetically gifted lifters, and, as Bondarenko says, “when they find these talented individuals they make them work really hard.”

In the 1970s and ’80s the Bulgarians were a dominant force in weightlifting, and their workouts included workouts of exceptionally high intensity that focused primarily on the two competition lifts. The Bulgarians’ demanding methods, created and taught by head coach Ivan Abadjiev, were not embraced by the Soviet school, although Bondarenko says some of their lifters may have tried certain aspects of it. One of the key differences between the two schools of training is that the Russians use preparation periods that include a variety of training methods, whereas the Bulgarians remain in a heavy competition period year-round. 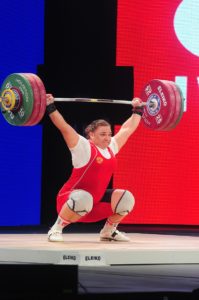 No doubt the Bulgarians had success with their methods, but their success occurred at the same time that Russia was also winning and setting records,” says Bondarenko. “That Russian system was successful, so there was no reason to adopt anything from the Bulgarians’ system. I should also say that as a coach, I am not a big fan of the Bulgarian method because it puts young athletes using maximal loads too frequently – only genetically gifted athletes could survive it without any injuries.”

“More and more young women are attracted to the sport of weightlifting in Russia because of CrossFit,” says Bondarenko. “Many come to fitness gyms to get a better shape with this type of training, then find themselves obsessed with weightlifting. Also, the Russian qualification requirements for designated sports ranking in weightlifting are much more feasible for women, and the women’s weightlifting records in Russia are easier to break. These two factors encourage them to train harder and compete.” 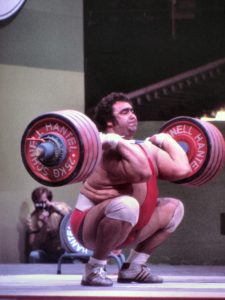 In both Russia and the US, many weightlifters come from physical fitness programs that perform Olympic lifting exercises for higher reps as a form of conditioning – for example, sets of 10 reps in the snatch or power clean. Bondarenko says that although the techniques that are used to perform high reps with light or moderate weights are different from those used for low reps and maximal weights, there are some technique flaws that must be addressed. One is the way in which the barbell makes contact with the upper thighs in the pull.

One of the most common errors Bondarenko sees among those who perform high reps in the Olympic lifts is a tendency to bump the bar off the thighs, which causes the bar to “launch forward,” resulting in an inefficient bar path. “The bar must always be close to the body during the pull,” Bondarenko says. “With light weights it is not going to affect performance as much, but with heavy weights it will show itself.” He adds that if errors in technique are not corrected early, and later the athlete decides to focus on weightlifting, it will be especially hard for that athlete to achieve optimal technique. One example of this problem is Mario Martinez, a three-time Olympian for the US who won a silver medal in the 1984 Olympics. When Martinez began lifting, he coached himself and got into the habit of pulling the bar with bent arms; by the time he teamed up with an experienced coach, the technique was so ingrained in his nervous system it could not be corrected.

In regards to strength, the back squat poundages of many world record holders from Russia were not much higher than their best clean and jerks. Among these were Olympic champions Vasily Alexeev, the first lifter to clean and jerk 500 pounds, and Yuri Vardanyan, an Olympic champion who broke world records in three weight divisions. To this, Bondarenko responds, “These champions are definitely the exception – we squat a lot in Russia. I have seen Lovchev – whose triumph we witnessed in Houston breaking the world record in the clean and jerk and total – back squat perhaps as much as 815 pounds for three reps. Also, many Russian lifters have squatted 880 pounds or close to it.”

What is the ratio of back squats to front squats in Russian workouts? Bondarenko says it depends on what period of training the athlete is in. In the early preparation period, just after a competition, more back squats are usually performed. As the competition gets closer, the front squat should have priority since it has more to do with competition cleans. As for reps, Bondarenko says he achieved his best results by focusing on sets of two-to-three reps in the front squat and five-to-seven reps in the back squat.

At the 2015 World Weightlifting Championships, the US women placed 13th in the team competition while the men placed 27th. Based upon the International Weightlifting Federation qualifying standards, the US will be able to send three women to the 2016 Olympics but the men have not yet earned any slots. Bondarenko has some ideas about what US lifters and their coaches need to do to improve:

“I do not intend to offend coaches and athletes from the US, but most of their developments in weightlifting were used in USSR in ’60s, techniques and methods already long forgotten and replaced. As bodybuilding emerged, it appears that most of the financing for research was diverted away from weightlifting. What I mean is that there was little real science in the sport in the US, especially in the area of programming. As a general observation, US coaches and athletes lack perception of the full picture – the ability to think in advance for months and years.”

“I am sure that there are a lot of talented lifters in the US who have access to well-equipped facilities and well-educated coaches, but to succeed in this sport you need a system. It is not like a strong man in Siberia is born, finds a barbell, and surprisingly breaks records – every athlete who became champion in Russia had access to a complete training system designed to forge champions. Likewise with the recent success of China. They have a large population, clubs everywhere, and coaches continually surfing the schools for talent. This is their system.”

Sergey Bondarenko believes that if you want to be the best, you need to learn from the best. The Russians know how to get weightlifters strong and powerful, so if you’re serious about training, study their methods.